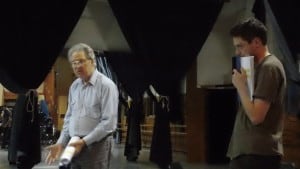 I’ve been having a LOT of fun working as a dramaturg and now as director for the new play Dead Man’s Wake by Larry Klein. Tonight is the staged reading and there are still a few seats left, but not many – we’ll be playing to a full house for this well-deserving play. I’ve been working with Larry for about a year on the script and then we decided it was time to bring in some actors to bring it to the next level and make more discoveries. We’ve been in rehearsal with Terry Boero (Leah), Gabriel Ross (Jess), Chuck Isen (Danny), Devin O’Brien (Brian), Wendy Wyatt-Mair (Andrea), Jim Jones (Tom), and Lucette Fleming (Janet). What a fantastic process and experience!

I took a different approach than the typical sit in front of a music stand and read  approach, and we actually blocked out and staged the play. By doing so we learned a LOT more. We even added in some props, lights and sound. Then, to allow the actors to focus in on the emotional content of the play and the relationships, we pulled back on the movement to take it to yet another level. Some of the blocking we are keeping in place where it helps even with scripts in hand.

With each rehearsal I find myself laughing so hard I have tears running down my cheeks and crying with the depth of the pain as the characters come alive in front of me, bringing me with them on their internal journeys. This is a GREAT play! I look forward to finding the producers who will bring it to full production.

More details about the reading HERE.