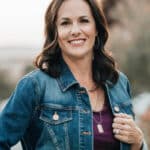 Growing up, author Cassie Sanchez always wanted superpowers and to be a warrior princess fighting alongside unlikely heroes. Suffice it to say, she lost herself in books, from fantasy to sci-fi to a suspenseful romance here and there. Now, she writes Romantic Fantasy for those who want to escape to a realm of magic, love, and the battle between good and evil. 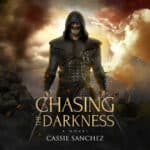 Cassie’s debut novel Chasing the Darkness is a gripping, romantic fantasy about an assassin obsessed with power and revenge, who will do whatever it takes to find the one who shattered his childhood. Magic, betrayal, and passion accompany Azrael, the Angel of Death, on a journey that will lead to destruction or redemption.

AMPlify the author’s voice by purchasing directly from Cassie, or find it at any of your favorite retail channels.

Pain is inescapable. Suffering is a choice.

Azrael, the Angel of Death, knows pain. The deaths of his mother and sister, as well as his harsh experiences in the Watch Guard at age twelve, have brutally shaped him into the most feared assassin in all of Pandaren.

Azrael’s role as a Hunter requires him to search for those with magic, called Spectrals, which he is happy to do. Hunting allows him to pursue his true goal–exacting revenge on the Fire Spectral who altered the course of his life.

Azrael’s obsession with revenge and power leads him to undergo an experimental procedure that gives him magic, but when this procedure has unexpected and dangerous side effects, he becomes a liability to the Hunters and the Watch Guard.

Rescued by the people he has sworn to eliminate, Azrael finds himself questioning everything he once believed as years of secrets and lies are exposed. His very nature is challenged as he battles unfamiliar emotions and navigates relationships that contradict the heart of a killer.

Can the Angel of Death have a conscience? Can Azrael?

Check out the Audiobook NOW!

Discussing, discovering, and enjoying audiobooks together. THE AUDIO BOOK CLUB is an original web-series produced by Pro Audio Voices taking an in-depth view of audiobooks and the industry. We explore brand-new releases of varying genres as well as classic throwbacks and hidden gems we’ve found and been recommended along the way.

At Pro Audio Voices we Inspire the World through the Stories we Bring to Life.
Are you ready for your story or message to inspire the world?

Discover how we can help you reach your goals for an audiobook, creative project, or in marketing.