What path of normalcy or even of happiness is possible for us if we are beset with both a fatal tragedy as a child and later again as a mother?

In Colla Voce, Linda Ludlow (Becky Parker) carries this burden. Her husband, Dr. Andrew Ludlow (Dorian Lockett), the head of a music conservatory, struggles to involve Linda, a former opera student of great promise from his conservatory, in social engagements designed to build her a pathway out of her hell to a richly deserved positive future.

Within a lovely social visit and concert meticulously planned by Andrew, Linda’s panic attacks undermine his confidence as a husband in their ability to overcome the enormous weight of the past tragedies.

Andrew thinks a visit with Patricia and John Whittington (Erica Lamkin and Heren Patel) might afford the means to at least reduce Linda’s pain, and a concert at the conservatory featuring their surviving son, Michael, might provide entertainment for all four of them.

John Whittington, a policeman who was innocently involved in Linda’s second tragedy, is tied to her in guilt. Patricia Whittington, a practicing psychologist, is also caught up in Linda’s travail by way of the fallout that has engulfed her husband. However, screenwriter Larry Klein lures none of these characters into a victim mentality.

Through their large-heartedness, can this quartet climb out of this avalanche of malaise? And is there any music deep and rich enough to provide at least a temporary respite for Linda when most needed?

I’ve seen two previous plays written by Klein, produced at West End Studios in Marin County: “Dead Man’s Wake,” where a father commits suicide in front of his son, and “Mr. Simon,” whose wife dies suddenly, after which their daughter retreats into a world with an imaginary friend. The through-theme in Klein’s work is sizing up and dealing with unquiet death and its messy consequences.

In his Colla Voce, more advanced by far than those two earlier works, Klein has moved from an obtuse, darkly clouded posture to a writer of brilliant emotional concision. The fine direction by Becky Parker, who also plays Linda Ludlow, has enabled the actors to craft extraordinary characters. The delicate, sometimes volatile ensemble work meets the author’s high bar: a story whose character strands are woven into a rope whose tensile strength reminds us that communities of family and friends, combined with livelihoods we love, make life very much worth living, untimely death notwithstanding.

* “Colla Voce” is an Italian musical term meaning “with the voice,” indicating that the vocal solo sings in a free manner and other instruments should follow. 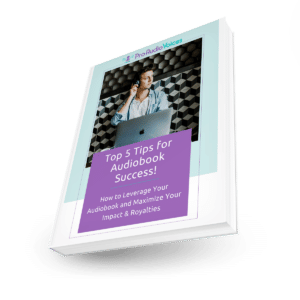 How to Leverage Your Audiobook and Maximize Your Impact & Royalties